Initially, only the root cgroup exists, to which all processes belong. You create an empty child cgroup by adding a subdirectory:

Each cgroup has an interface file called cgroup.procs that lists the PIDs of all processes belonging to the cgroup, one per line. A process can be moved to a cgroup by writing its PID into the cgroup's cgroup.procs file:

Only one process can be migrated on a single write call. If a process is composed of multiple threads, writing the PID of any thread migrates all threads of the process.

Note: A process can be in only one cgroup at a time.

You specify controllers for each cgroup using two interface files that appear in every cgroup—including the root and all its children:

You activate or deactivate controllers by writing their names to cgroup.subtree_control, each preceded by either a plus sign (+) to enable it, or a minus sign (-) to disable it, as in this example:

In the hierarchy below, each cgroup.subtree_control file determines the set of controllers available to its child cgroups, i.e., the controllers that appear in the cgroup.controllers file of its children. 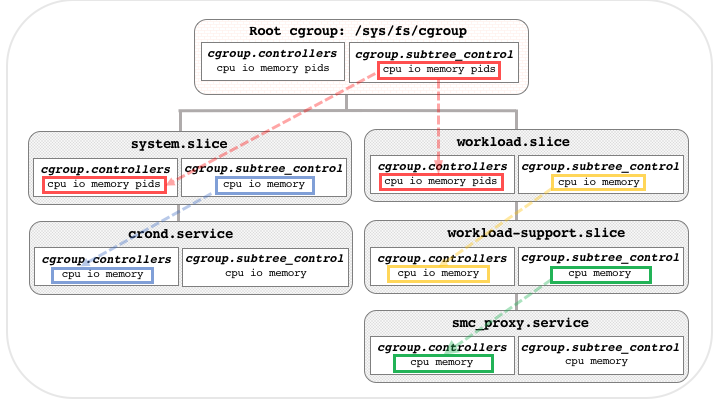 In this example, the root cgroup distributes resources to two partitions: system.slice where system processes run, and workload.slice, where production workload apps typically run. The set of resource controllers available to child cgroups with services like crond.service, or smc_proxy.service, is further restricted by the cgroup.subtree_control files of their respective parents.

The cgroup hierarchy used for the fbtax2 project is similar to the one above, but introduces some additional structures and best practices.

It divides the hierarchy into three top-level cgroups, each with its own purpose. In addition to the system.slice cgroup where system binaries run, it also includes:

This cgroup protects processes required to keep the host running. It contains critical host management functions like sshd, and oomd, an alternative to the system OOM (out-of-memory) killer, that we'll look at in a later section of this case study.

Protecting the main workload from resource conflicts with system binaries was a primary goal of the project, and that's the main purpose of workload.slice. In this case, the main workload gets its own child cgroup workload-container.slice to protect hhvm.

In the next section of this case study, we'll look at how fbtax2 uses PSI memory pressure metrics.

All controller behaviors are hierarchical: if you enable a controller on a cgroup, it affects all processes belonging to the cgroups in its sub-hierarchy.

Similarly, most of the statistics you can query in cgroups, such as current memory or CPU usage, show the sum for the entire subtree.

Restrictions set closer to the root in the hierarchy can't be overridden from further away. When you enable a controller on a nested cgroup, it always restricts the resource distribution further.

Note: The sum of the resources consumed by child cgroups can't exceed the total amount of resources available to the parent.

Note: An exception to this rule is the root cgroup, which can both contain processes and control resource distribution.

Thus, if a parent cgroup controls resource distribution to its child(ren) (i.e., by having a non-empty cgroup.subtree_control file) any processes in the parent cgroup must be moved to their own child cgroups.

For instance, a cgroup like /cg1/cg2 can contain processes, but if /cg1 also contains any processes of its own, those processes should be moved to their own leaf node, e.g., /cg1/cg3.

For certain legacy configurations, the CPU controller can also contain processes and control resource distribution. See the sections on thread mode on the cgroup manpage for details.

These cgroup interface files come in handy when designing and testing a cgroup hierarchy: